Infinite possibilities. Eye-opening experiences. What will you make of it?

NROTC is dedicated to educating and training young men and women who have a strong desire to serve their nation. 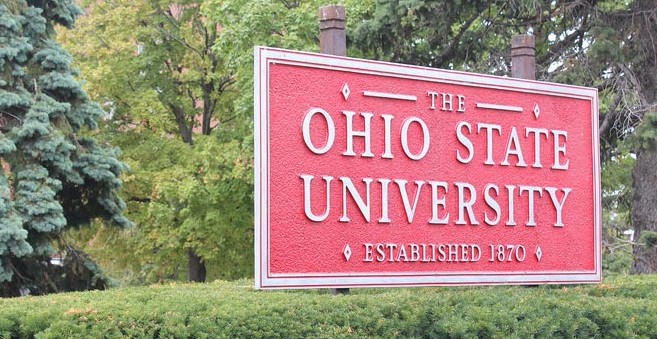 Your time at The Ohio State University will be enriched with a multitude of unit and university activities, such as the sailing team, drill team, choir, rifle-pistol team, engineering societies and sports clubs. Your fellow midshipmen are members and contributors to the overall university and local communities. You can expect to be engaged and challenged mentally, physically and morally in the course of your multi-year journey towards a commission in the Navy or Marine Corps. The Ohio State University NROTC program is designed to foster your development in each of these areas in order to provide the Navy or Marine Corps with officers that are prepared to serve with honor.

The Ohio State University offers a wide range of majors. Currently, the majority of our students are pursuing a technical major. Your Ohio State University degree will certainly prepare you for a successful career whether you choose a full career in the Navy or Marine Corps or if you choose to enter the civilian work force after completing your obligated service.

Thank you for visiting our website and please feel free to contact us with any questions. We look forward to meeting you!

Whether you have questions or concerns, below is a list of resources that should help address anything you are unsure about.

Freedom of Information Act
Access to Department of Navy records

Veterans Crisis Line
Resources for veterans and their families

And Professor of Naval Science

Captain Mark McCulloch was born in Greensboro, North Carolina and raised in Freehold, New Jersey.  He is a 1992 graduate of the United States Naval Academy and 1993 graduate of Johns Hopkins University with B.S. and M.S. degrees in Computer Science.

He reported to Assault Craft Unit Two as Executive Officer in April 2009 and fleeted up to Commanding Officer in November 2011.  Deployed operations included serving as the Offload Control Officer, directing all ship to shore movement of relief supplies, in Port-au-Prince, Haiti, following the January 2010 earthquake.

CAPT McCulloch then served as Chief of Legislative Affairs at the headquarters of US Pacific Command, directing the USPACOM Congressional outreach program and advising the Commander and staff on all legislative matters.

While assigned to the staff of Commander, Pacific Fleet, CAPT McCulloch served as Executive Assistant to the Director of Maritime Operations for 13 months before being selected to lead maritime enforcement of UNSCR sanctions against North Korea. 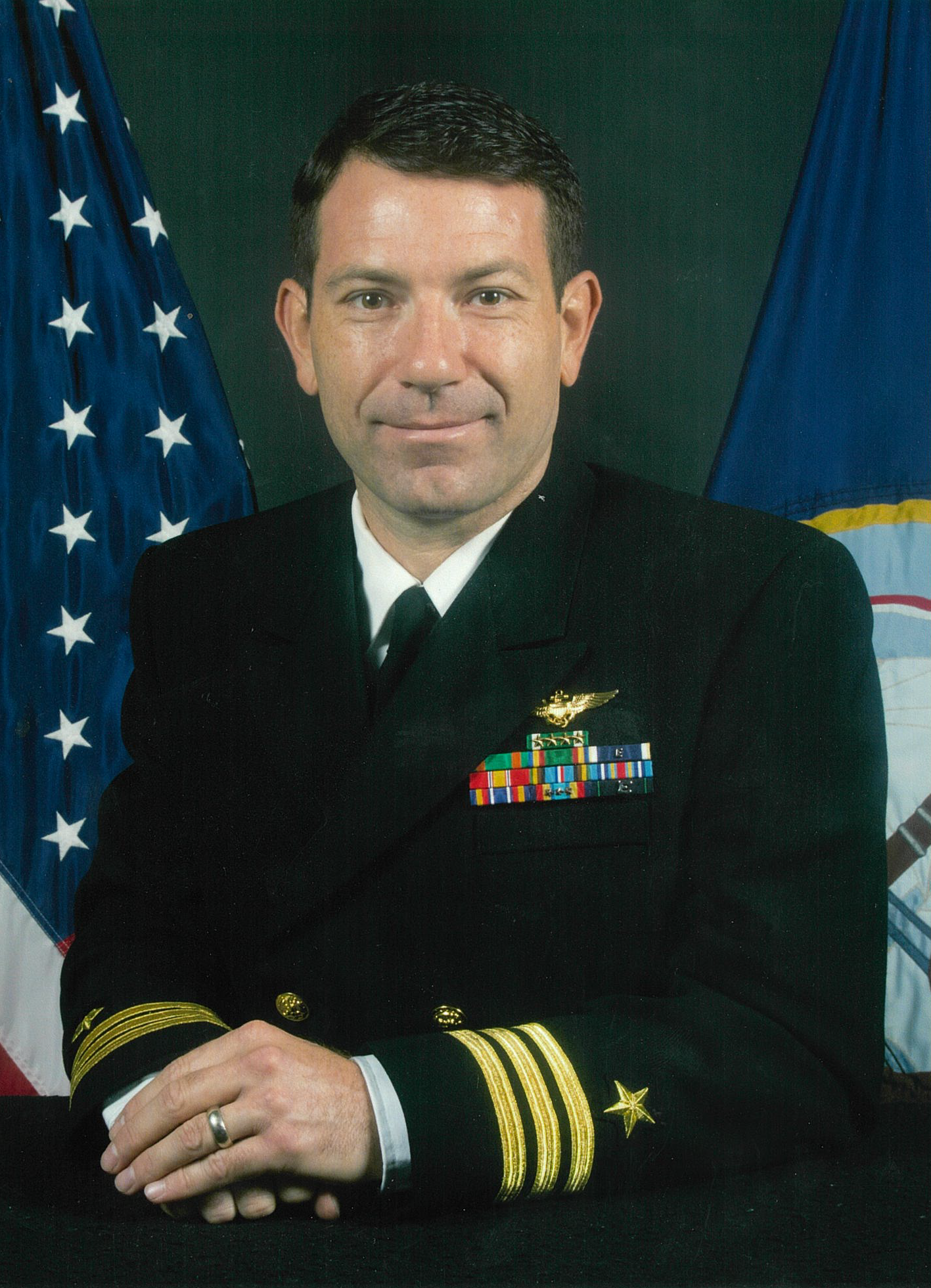 Commander Chrapkiewicz is a native of Wadowice, Poland. His family immigrated to the US in 1979 where they moved to Port Clinton, Ohio and became citizens in 1984. He graduated from Port Clinton High School in 1995 and is an alumnus of Denison University in Granville, Ohio, earning a Bachelor of Arts degree in Chemistry in 1999. After commissioning through the Officer Candidate School (OCS) program at NAS Pensacola, FL, he was selected for flight training and designated a Naval Aviator in December 2001.

Operationally, Commander Chrapkiewicz served in several squadrons flying the UH-3H and VH-3A Sea King, TH-57B/C Sea Ranger, and MH-60S Seahawk accumulating over 2000 flight hours. His first fleet tour was with the Fleet Angels of HC-2 in Norfolk, VA in 2001 where he deployed to Manama, Bahrain in support of Operation Iraqi Freedom and Naples, Italy in support of Commander Sixth Fleet. He then transferred in 2005 to NAS Whiting Field flying for both the Vigilant Eagles of HT-18 and the Hellions of HT-28 in Milton, FL as an instructor pilot. During his instructor tour he attended, via distance learning, the Naval Postgraduate School in Monterey, CA earning an Executive Master of Business Administration degree in 2008. Upon completion of instructor duty, CDR Chrapkiewicz transferred to the USS Harry S. Truman (CVN 75) as the Tactical Action Officer and Assistant Combat Direction Center Officer in 2008.   Upon selection as a squadron department head, he was assigned to the Chargers of HSC-26 in Norfolk, VA in 2010 where he served as the squadron Safety Officer, Training Officer, Administration Officer, and Operations Officer. During this tour, he deployed to Manama, Bahrain as the Officer-in-Charge (OIC) of a four aircraft detachment supporting Operation Enduring Freedom. Upon successful completion of his department head tour, CDR Chrapkiewicz joined the ranks of Commander, Operational Test and Evaluation Force (COTF) in Norfolk, VA in 2013. There he developed and executed operational testing of new navy satellite acquisition programs including Mobile User Objective System (MUOS), Navy Multi-band Terminal (NMT), and Advanced Extremely High Frequency (AEHF) systems. He then transferred aboard the USS George Washington (CVN 73) as the Safety Officer in 2016.

Captain Ortins is a native of Beverly, Massachusetts.  He graduated from the University of South Carolina with a Bachelor of Arts in International Studies in 2014.  He was commissioned a Second Lieutenant from the NROTC program in March 2015.  After completing The Basic School and Infantry Officers Course, he reported for duty to 3d Battalion, 8th Marines, 2d Marine Division at Camp Lejeune, North Carolina.

Following his return from deployment in August 2017, 1stLt Ortins was transferred to Company I to serve as Rifle Platoon Commander, 1st Platoon.  In October 2017, 1sLt Ortins served as 3d Battalion, 8th Marines’ liaison to the Defense Advanced Research Projects Agency (DARPA) during the Marine Corps SQUAD-EX program at Fort Stewart, Georgia.  In this capacity, he provided software engineers and project managers with feedback on developing technology for use by future Marine Corps rifle squads.  He completed the Weapons and Tactics Instructor Course, the Marine Advisor Course and the Fire Support Coordinator Course in preparation for his next deployment.

In September 2018, 1stLt Ortins deployed as Company Executive Officer, Ground Combat Element in support of Special Purpose Marine Air Ground Task Force-Crisis Response-Africa (SPMAGTF-CR-AF) 19.1.  During this deployment, 1stLt Ortins participated in theater security cooperation missions throughout Europe and crisis response operations in Africa.  While deployed, he was promoted to the rank of Captain and selected for his current assignment.

Captain Ortins reported as Marine Officer Instructor and Assistant Professor of Naval Science at the Naval Reserve Officer Training Corps Unit, The Ohio State University in May 2019.  He is responsible for preparing Marine Option Midshipmen and Marine Enlisted Commissioning Educational Program students for Officer Candidates School and serving as the Marine Corps representative to the unit.

Captain Ortins’ personal decorations include the Navy and Marine Corps Commendation Medal and various campaign, unit, and service awards. He holds a Master of Science in Global Studies and International Relations from Northeastern University.

LT Nicholas Weithman was born and raised in Naperville, Illinois. He graduated from The Ohio State University in May 2014 with a degree in Mechanical Engineering. He commissioned through The Ohio State NROTCU.

LT Weithman reported to Nuclear Power School is Charleston, SC in May 2014. He completed training there in November 2014 and went to Groton, CT for Submarine Officer Basic Course (SOBC) in December of 2014. He completed SOBC in February 2015 and went back to Charleston, SC in March 2015 for Nuclear Prototype Training Unit (NPTU). He completed training at NPTU in November 2015 and received orders to report to the USS MAINE (SSBN 741) out of Bangor, WA in December 2015.

While onboard the USS MAINE LT Weithman served as the Chemistry and Radiological Controls Assistant, the Electrical Officer, and the Assistant Engineer. While on board he served on 2 strategic deterrence patrols, transferred the boat to Puget Sound Naval Shipyard, and was a supervisor over the following key events: Setting Conditions for Refueling, Cold Rx Plant Operations, Undocking, and Hot Rx Plant Operations. In November 2017 he passed the Prospective Nuclear Engineer Officer exam and interviews at Naval Reactors. He departed the USS MAINE in October 2018 after receiving orders to The NROTCU The Ohio State University as the Nuclear Power/ Submarine Officer Instructor in November 2018. 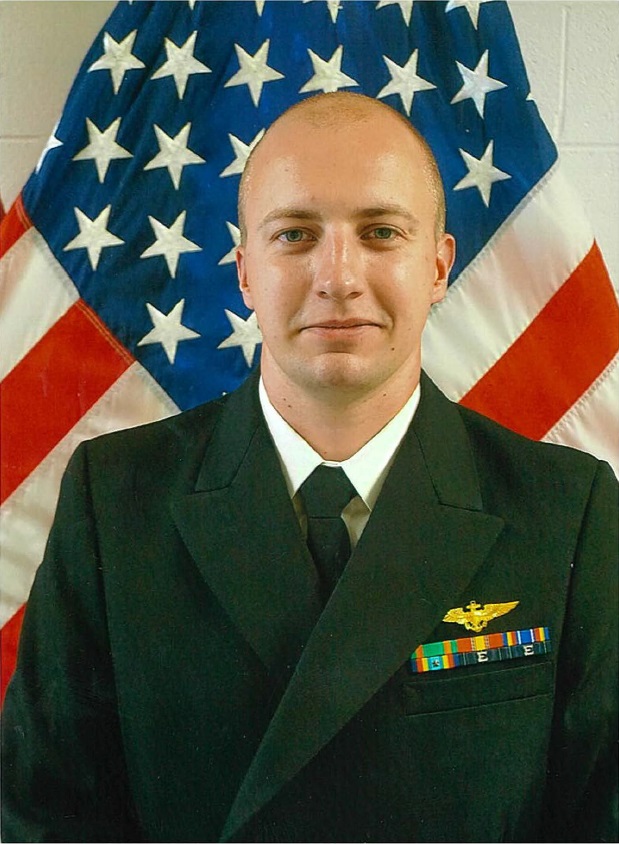 Lieutenant Eliott Peters grew up in Newark, OH, where he graduated from Newark Catholic High School in 2008. He attended the Miami University (OH), earning a Bachelor of Science in Interdisciplinary Business Management and commissioned as an Ensign in the United States Navy via the Naval Reserve Officers Training Corps in May 2012.

In September of 2012 Lieutenant Peters reported to Naval Air Station Pensacola, Florida to begin his
Naval Aviator Training and earned his “Wings of Gold” in May 2014 as a Naval Aviator. Following Fleet Replacement Training in the P-8A “Poseidon” at Naval Air Station Jacksonville, Florida, Lieutenant Peters reported to the War Eagles of VP-16 in February of 2015, also in Jacksonville. His first assignments there included PR/AME Branch Officer, Training Administration Officer, Assistant Command Services Officer, Flight Officer and Avionics/Armament Division Officer.

Lieutenant Peters assumed duties as the Aviation Officer Instructor at The Ohio State University, NROTC Battalion in February of 2018. 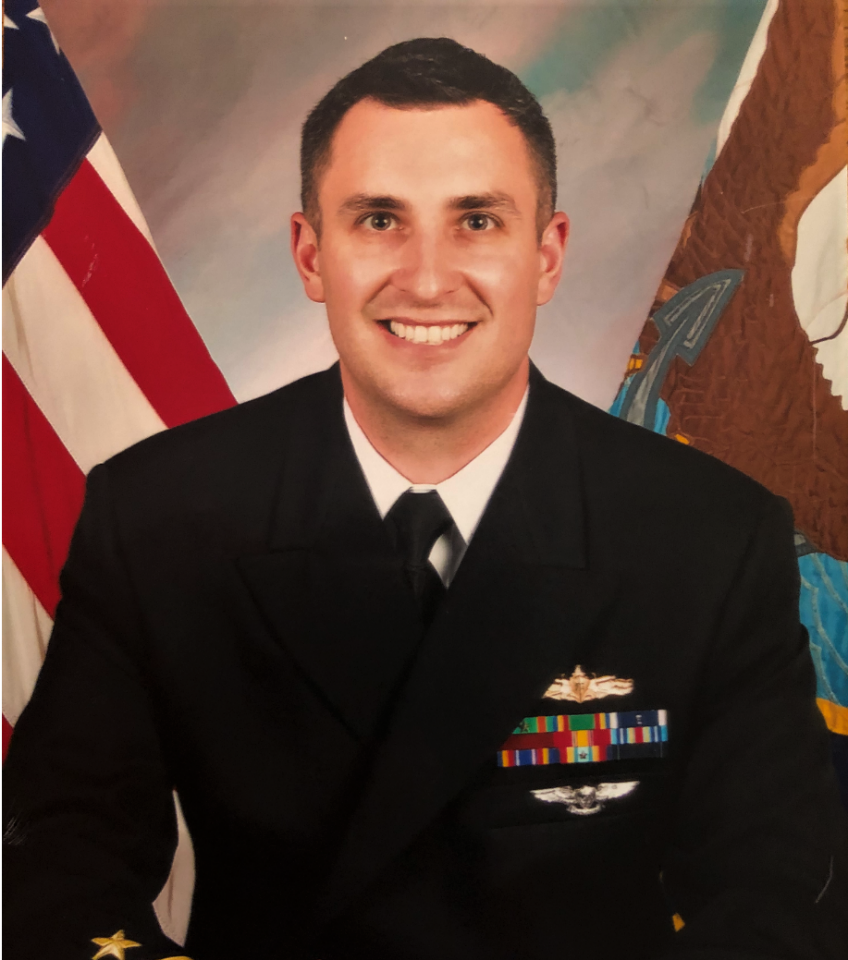 Doug is a native of Westerville, Ohio. He graduated from St. Francis DeSales High School and is an alumnus of Denison University, earning a Bachelor of Arts degree in Economics.

His first assignment was onboard USS McFAUL (DDG 74) in Norfolk, Virginia where he served as the Electrical Officer and Assistant Chief Engineer earning his qualification as Surface Warfare Officer. During the ship’s dry-dock maintenance period, he deployed to the Black Sea and North Arabian Sea onboard USS OSCAR AUSTIN (DDG 79). In 2018 he joined Destroyer Squadron TWO serving as the Training Officer for nine Arleigh Burke-class guided missile destroyers. He stood over 1,000 hours as Staff Tactical Action Officer during a 10-month around-the-world deployment attached to USS ABRAHAM LINCOLN (CVN 72) in support of Operation Freedom’s Sentinel and Sixth, Fifth, and Seventh Fleet operations. 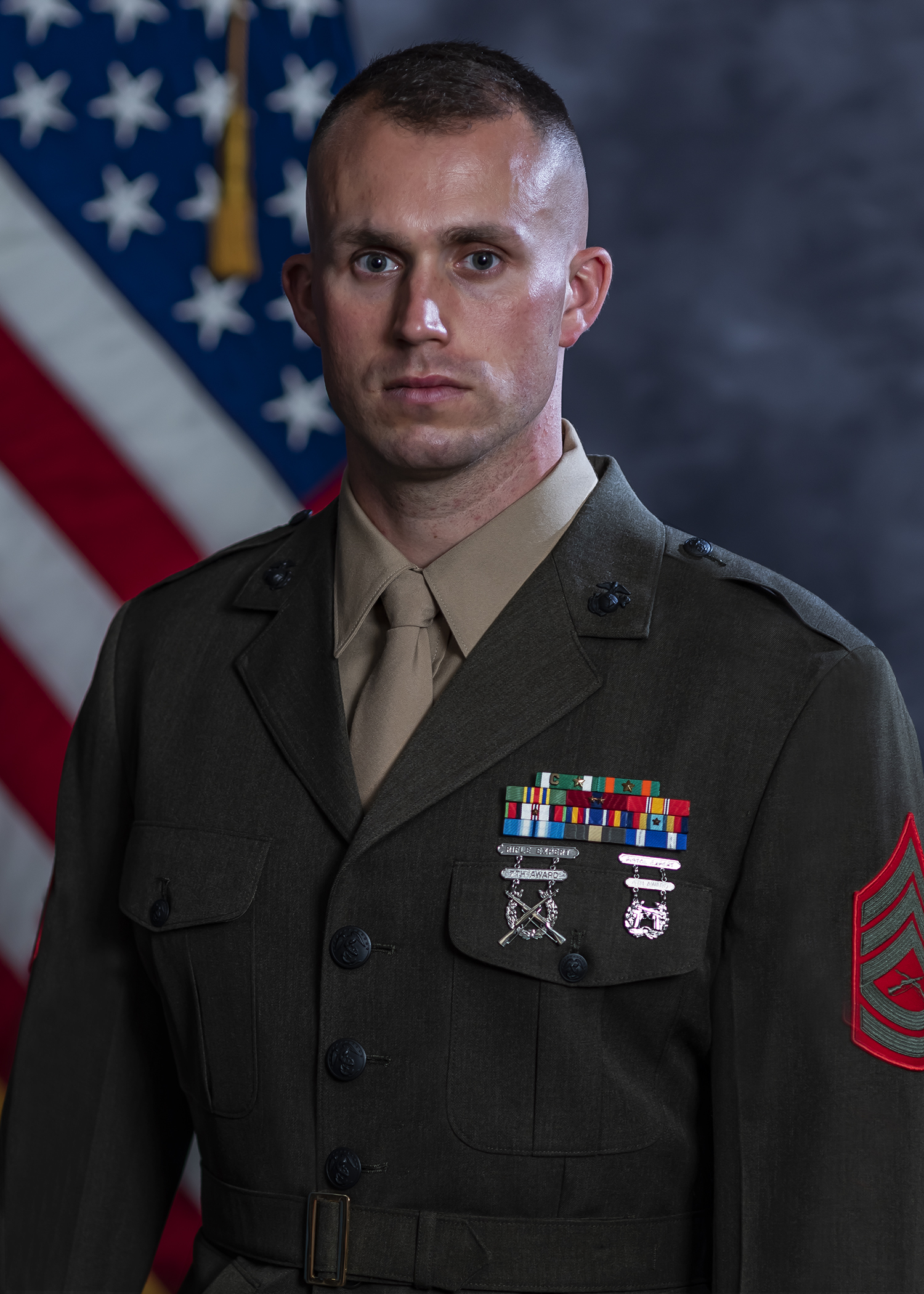 Gunnery Sergeant Puckett was born in Greensboro, North Carolina and raised in Eden, North Carolina.  In October 2010 he attended recruit training with India Company, 3rd Recruit Training Battalion, Marine Corps Recruit Depot Parris Island, South Carolina. In January 2011 he then reported to the School of Infantry, Camp Geiger, North Carolina for Marine Combat Training. In February 2011 he transferred to Camp Pendleton, California, to attend the Amphibious Assault Crewmen Course where he earned the MOS 1833. He was meritoriously promoted to Lance Corporal due to being the honor graduate of his class.

In June 2011 upon completion of school Lance Corporal Puckett reported for duty to 2D Assault Amphibian Battalion, 2D Marine Division, Camp Lejeune, North Carolina. He served primarily as a crew chief in Alpha Company. In October 2011 he deployed with his company to South America in support of Special Purpose MAGTF Southern Partnership Station-12, where he served as a fire team leader in a provisional infantry platoon. He returned from deployment in December 2011. He was promoted to the rank of Corporal in March 2012 and was assigned as an assistant section leader. February 2013 he was meritoriously promoted to the rank of Sergeant. In August 2013 he deployed with Alpha Company, third platoon where he served as an assistant section leader to Japan in support of the Unit Deployed Program. He returned home from deployment in February 2014.

Staff Sergeant Puckett deployed in support of Operation Freedom Sentinel to Helmand Province, Afghanistan fulfilling the roles of Assistant Operations Chief and the Commanding Generals Personal Security Detachment Chief. While deployed Staff Sergeant Puckett was combat meritoriously promoted to the rank of Gunnery Sergeant out of all forward deployed forces under Marine Forces Central Command in September of 2019. Prior to completion of his deployment Gunnery Sergeant Puckett was selected as in the incoming Assistant Marine Officer Instructor for the NROTC program at Ohio State University.

For questions regarding NROTC at The Ohio State University, contact LT Andrew Shopland at (614) 292-6015